Now they’ve got bad blood! Don’t expect Taylor Swift to work with music manager Scooter Braun any time soon. The “You Need to Calm Down” singer, 29, slammed the exec, 38, for purchasing her masters — but that might not be the whole story.


Taylor Swift’s 7th Album: Everything We Know About the Next Era of Music

“Scooter has tried to reach Taylor though multiple channels,” a source tells Us exclusively. “He was really shocked at her response. Scooter won’t be commenting publicly about this… He wants to have a private, direct conversation with Taylor.”

The singer took to Tumblr on June 30 to share her side of the story. “I learned about Scooter Braun’s purchase of my masters as it was announced to the world,” she wrote. “All I could think about was the incessant, manipulative bullying I’ve received at his hands for years.” The star pulled no punches as she accused Braun of being the mastermind behind the 2016 drama involving his former client Kanye West and Kanye’s wife, Kim Kardashian, which Taylor claims nearly ruined her career. “Essentially,” Swift lamented, “my musical legacy is about to lie in the hands of someone who tried to dismantle it.”

But, the insider adds that the star’s version of events doesn’t match up with the timetable of the record label’s sale. “The potential sale of Big Machine, and Taylor’s renegotiation with Big Machine were widely reported and in that entire process,” adds the source. “Taylor didn’t reach out once about wanting her masters.”


Taylor Swift’s Dating History: A Timeline of Her Famous Exes and Flings 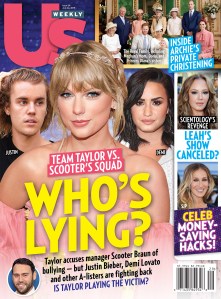 However, Donald Passman, attorney for Swift, tells Us, “Scott Borchetta never gave Taylor Swift an opportunity to purchase her masters, or the label, outright with a check in the way he is now apparently doing for others.”

For more on Taylor Swift, watch the video above and pick up the latest issue of Us Weekly, on newsstands now!

With reporting by Marc Lupo