FYI: Lizzo has been releasing music since 2013, but now (ahem, finally!) the world has zeroed in on the brilliance of the single-named singer-rapper-actress-flautist’s star wattage.

“This year has been incredible,” the 31-year-old tells Us Weekly exclusively. “Ever since ‘Juice’ dropped in January, it’s just been juicy as f–k.”

Indeed, 2019 has been good to Lizzo, awakening a groundswell of devout fans (she calls them “Lizzbians”) who worship her sharp lyrics as much as her empowering attitude.

Now the superstar has snagged an Absolute Juice partnership and is taking her chart-topping album Cuz I Love You on a sold-out North American tour. She also wowed at the 2019 MTV Video Music Awards in August and has a role in Jennifer Lopez’s upcoming movie, Hustlers.

Read the Q&A below for more of Lizzo’s deliciously juicy candor!


Hit Pop Songs That Were Intended for Other Artists

What has the past year been like for you?
Everything has been producing fruit and I’m just so honored. I’m really living in the moment and celebrating one toast at a time. Now that I’ve got this Absolut Juice deal, I’ve been toasting with Absolut Juice spritzes every f–king night!

Was there a moment where you were like, “Wow, I’ve made it”?
I’m not just saying this, but this Absolut deal was a big moment for me. I felt like f–king Britney Spears. I was like, I’m getting a liquor deal?! I couldn’t even believe it. We shot a video, a commercial, photos. … I feel like that bitch in A Star Is Born!

Now that you’re so famous, do you ever think, “It took you guys long enough!”?
Listen, I don’t think anyone should ever expect fame. I’ve never expected fame. I don’t think that’s something people should live their lives trying to get, because it doesn’t really happen to too many people, and the fact that it’s happening right now is still kind of surreal to me.

You post gorgeous almost-nude pictures on Instagram. Have you always been this confident and outspoken about body positivity?
It definitely comes with time. I wasn’t really given the opportunities or the privileges to feel like a sex symbol when I was growing up. I was a fat black girl in Houston and I didn’t see myself in magazines. 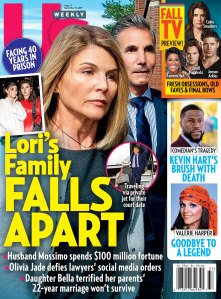 When did that change?
I was like, “You know what, bitch? I want to be a sex symbol!” I said that to myself when I was, like, 22, 23. And I really started to embrace the sexiness about me, not just the cuteness or the beauty. I started to work on it more and more, and I realized the vulnerability that I show when I’m naked is my greatest strength.

Do you have advice for other young people who are struggling to achieve full-body confidence?
It’s hard, because self-love and self-confidence is a personal journey. You’re never gonna believe it until you believe in yourself. But luckily, now we have so many people you can see yourself in. You can go on the internet or look on TV and see people who were really marginalized and underrepresented in the past. That’s the most important thing. You have to see yourself, find yourself somewhere out there. You’ve got to go on that journey — and I believe in you.

Do rude comments online ever get under your skin, or are you able to laugh off the trolls?
I have the best comebacks for trolls. I can put them in their place! But if I do it, I’m feeding the troll and giving it attention. Back in the day, I used to give trolls all the time, but now that I’ve got 4 million followers, man, [I’m not] gonna give somebody a check and 15 minutes of fame! I love being petty though! [Laughs.]