Staying strong. Lori Loughlin’s family is still reeling from news that the Full House alum allegedly participated in the nationwide college admissions scandal. Daughters Olivia Jade and Isabella Rose Giannulli have stayed out of the spotlight since March, but in honor of their mom’s 55th birthday on July 28, the girls broke their social media silence to post a warm note to her on Instagram.

“They’re showing a united front on social media,” a source exclusively reveals to Us Weekly, “but the family is still very strained and there’s a lot of deep-rooted hurt.”

The actress, 55, and her husband, Mossimo Giannulli, were among the 51 people who were indicted in March for their alleged involvement in the bribery scam. The parents of Bella, 20, and Olivia Jade, 19, were accused of paying $500,000 to have their daughters designated as University of Southern California crew team recruits — despite their inexperience in the sport — so they would be accepted into the school.

“The family has desperately been trying to heal together,” adds the insider. “It obviously wasn’t a good look when Lori was seen looking so joyous in public when it was clear her kids were suffering. She cares less now about proving something to the public and has really taken time to be there for them however she can.” 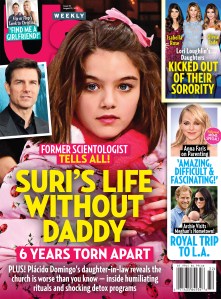 Lori Loughlin and Mossimo Giannulli: A Timeline of Their Relationship

For more on the college admissions scandal, watch the video above and pick up the latest issue of Us Weekly, on newsstands now!

With reporting by Emily Marcus