No time for haters. Brian Austin Green defended himself after a troll criticized him for not posting a public tribute to his former Beverly Hills, 90210 costar Luke Perry.

Green, 45, posted a video promoting a live taping of his “…With Brian Austin Green” podcast via Instagram on Thursday, March 14. An Instagram user seemingly felt the clip was insensitive, given the circumstances, and let her feelings be known.

“RIP Luke Perry! I’m not sure how you could do this so soon,” the person commented. “I haven’t seen anything from you about his passing, maybe I’ve missed it somewhere. Pretty much everyone else had something to say. It’s just not the same without #LukePerry and it seems pointless without him. So sad.”

The Anger Management alum, who played David Silver on the ‘90s television series, kept his cool when he replied. “Thank you for your words. Thank you to everyone for sticking up for me but it’s not necessary,” he wrote in response. “Carrie, the passing of Luke is terrible. As was said by many, everyone grieves in different ways. If it’s too soon for you to attend what is meant to be a fun night for the fans then you don’t have to. Everyone should respect everyone’s process.” 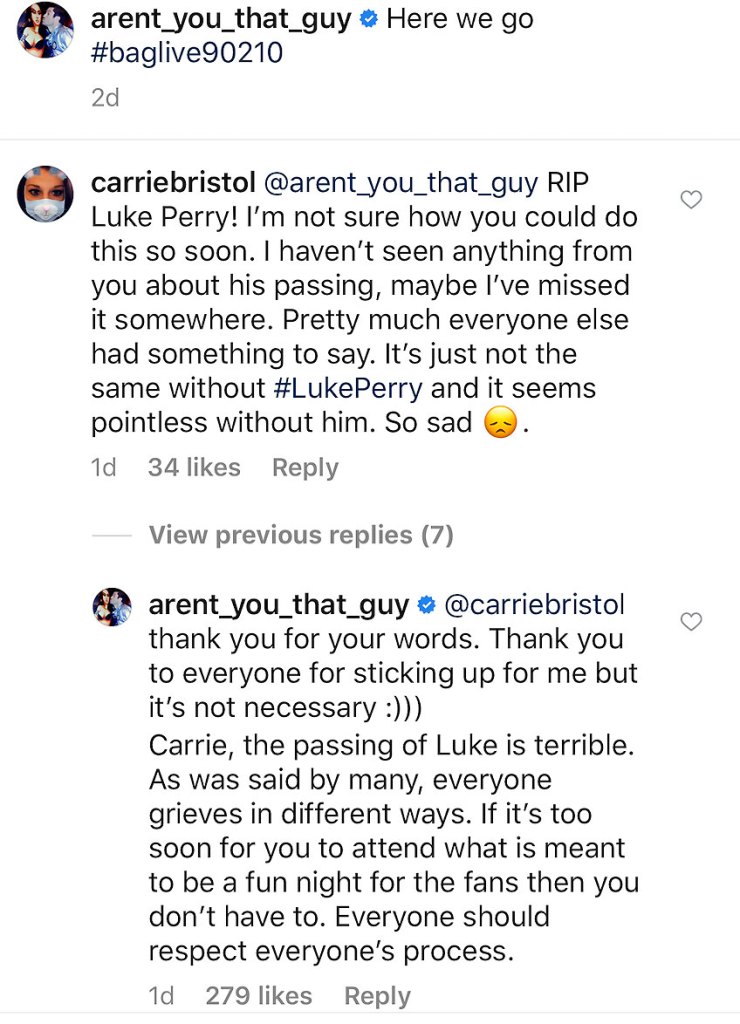 Perry, who played Dylan McKay on the show, died in a Los Angeles-area hospital with his family by his side on March 4, less than a week after he suffered a massive stroke in his home. The Riverdale star was 52.

While Green didn’t honor the late actor publicly, many of his former 90210 costars remembered Perry with emotional messages on social media in wake of his passing.

Jason Priestley a.k.a. Brendan Walsh broke his silence three days after the Oz actor died. “Luke was not only a star, he was an incredibly bright light that was extinguished far too soon,” the Call Me Fitz star, 49, wrote via Instagram. “And that is why I, and so many others, are in so much pain today.”

Ian Ziering, who starred as Steve Sanders for all 10 seasons of the FOX hit, shared a sweet throwback pic of the pair on Instagram and wrote, “Dearest Luke, I will forever bask in the loving memories we’ve shared over the last thirty years … God please give him a seat close to to you, he deserves it.”

Other 90210 alums including Tiffani Thiessen, Shannen Doherty, Randy Spelling and Paul Johansson also paid tribute to Perry on social media after his death.