Jennifer Esposito seems to be having a laugh at her ex-husband Bradley Cooper’s expense.

The NCIS actress, 45, who was married to the American Sniper actor, 44, for five months before filing for divorce in May 2007, commented on a joke David Spade made about her former spouse following his steamy 2019 Oscars performance with Lady Gaga.

“Is there any chance these 2 aren’t f–king?” the Rules of Engagement alum, 54, captioned a shot of Cooper’s duet with the former American Horror Story star, 32, on Sunday, February 24.

Esposito then chimed in with a simple, “Ha.” 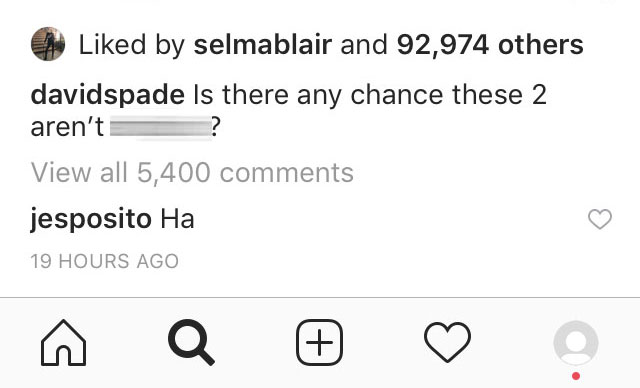 Fans speculated about a romance between the A Star Is Born leads after the two maintained heavy eye contact and got close enough to kiss, sharing a seat and a microphone during their performance of “Shallow.”

It wouldn’t be the first time Esposito threw a jab her ex’s way. She seemingly referred to Cooper as a “master manipulator” in her 2014 memoir, Jennifer’s Way. “I should have noticed the red flags from the beginning—actually, they were more like an entire marching band squad of red flags — but I ignored them because, honestly, I didn’t think the relationship was really going to go anywhere,” she wrote. “He was funny, smart, cocky, arrogant, and a master manipulator. I didn’t necessarily find him that attractive, but I figured that I could enjoy his sense of humor and nonsense for a while.”

She continued: “We had fun, but he also had a mean, cold side. His personality could flip on a dime … It wasn’t all bad all the time, so I figured this was just my lot, and I took the good with the bad, even though the bad was extremely bad.”

Recalling her split, she wrote, “Within days, my relationship hit an all-time low, and within a week, it was over. Abruptly, rudely, and with the exact callousness that I’d come to expect from him, but this time, I did nothing but agree to end it.”

The film director discussed their brief union with Howard Stern in March 2011, saying, “It was just something that happened. The good thing is, we both realized it … Sometimes you just realize it.”

A source exclusively told Us Weekly that Cooper’s girlfriend, Irina Shayk, wasn’t bothered by her boyfriend’s on stage antics. “Irina knows that Bradley and Gaga are artists,” the source said of the model, 33. “It’s a nonissue for her. They were in character putting on an Oscar performance.”

There didn’t seem to be any bad blood on Gaga’s part, either, with the nine-time Grammy nominee receiving a big hug from Shayk after nabbing the award for Best Original Song.


Irina Shayk and Bradley Cooper: A Timeline of Their Romance

The Victoria’s Secret runway strutter also jumped up from her seat before other audience members to give the songstress and her man of nearly four years, with whom she shares 23-month-old daughter Lea, a standing ovation.

Gaga split from fiancé Christian Carino earlier this month after two years together.