Taylor Swift’s new philosophy when it comes to worrying about her weight? Shake it off. Her relationship with boyfriend of two years, Joe Alwyn, “has given Taylor confidence in who she is,” a source reveals in the new issue of Us Weekly.


Taylor Swift and Joe Alwyn: A Timeline of Their ‘Gorgeous’ Relationship

“She’s learned to accept herself and her body and wants to be a role model for other women, and to encourage them to quit body-shaming themselves,” says the insider. In her recent essay for Elle magazine, the “Teardrops on My Guitar” singer, 29, listed the 30 lessons she has learned ahead of her 30th birthday this December. Her newfound body positivity was number four on the list.

“I learned to stop hating every ounce of fat on my body. I worked hard to retrain my brain that a little extra weight means more curves, shinier hair and more energy,” wrote the Grammy-winner. “I think a lot of us push the boundaries of dieting, but taking it too far can be really dangerous. There is no quick fix. I work on accepting my body every day.”

Accepting her figure isn’t the only way Swift has changed for the better since she began dating 28-year-old Alwyn. In the Elle essay, the Pennsylvania native notes, “For too long, the projected opinions of strangers affected how I viewed my relationships.” She writes that she has now “learned not to let outside opinions establish the value I place on my own life choices.”


Taylor Swift Through the Years

This means keeping her relationship with the “Mary Queen of Scots” actor as far away from the spotlight as possible. She’s spoken so little of her two-year romance with Alwyn, that it’s not entirely clear how exactly they met. And as the pair have become more serious, “Joe’s really showed her a different lifestyle and the value of privacy,” said an insider in 2018. 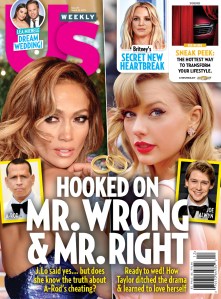 Away from the cameras and attention, Swift doesn’t need to try and impress the Royal Central School of Speech and Drama graduate. “She finds Joe to be one of the coolest guys ever, someone she can just be open and herself with,” reveals the first source. “That’s something she really values and appreciates.”

For more on Swift, pick up the new issue of Us Weekly, on stands now.