Thawing the ice? Jordyn Woods appeared to be attempting to do just that on Friday, March 8, when she “liked” an Instagram photo posted by her best friend Kylie Jenner just weeks after being spotted kissing Khloé Kardashian’s then-boyfriend, Tristan Thompson.


Kylie Jenner and Jordyn Woods' Friendship Throughout the Years

Forbes’ youngest-ever self-made billionaire, 21, shared the snap, which showed her looking over her shoulder in a white sports bra and shiny red leather pants, earlier on Friday.

Woods, 21, wasn’t the only one admiring the shot: The Good American designer, 34, also chimed in on the post, writing, “Yes yes yes yes” in the comments section. 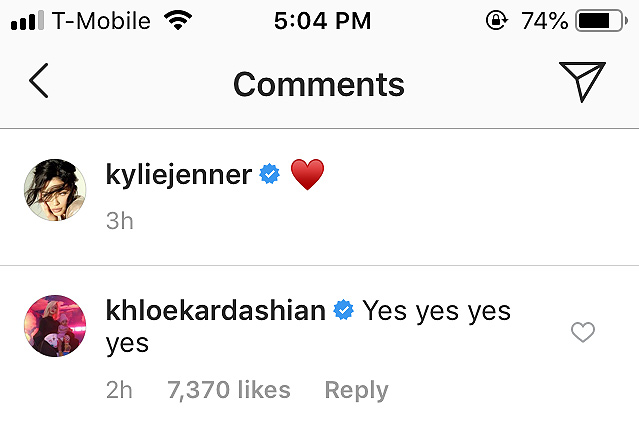 The model caused serious tension with the women on February 17, when she was spotted kissing the NBA player, 27, at a party in his home.

Despite Woods’ best efforts, a source told Us that the Kylie Cosmetics founder was not on speaking terms with her Life of Kylie costar.

A second source revealed that though Jenner had initially “defended” her BFF, her future with Woods had become uncertain. “At first, the family thought Kylie would eventually take Jordyn back, but now they don’t think that she will,” the source said.

A separate insider told Us that the Kardashian family became even more angry with Woods, who moved out of Jenner’s home on February 20, after she sat down with Jada Pinkett Smith for an interview on the Girls Trip star’s Red Table Talk Facebook Watch series on March 1.

“The Kardashians and their friends are very mad. Jordyn is not telling the truth,” the insider told Us. “Jordyn is clearly only out for Jordyn.”

The insider also claimed that Woods had not apologized directly to the Revenge Body host for her indiscretion despite assertions in her interview with Smith, 47, that she had. “This doesn’t count as an apology,” the insider said.

The Strong Looks Better Naked author took to Twitter to slam the young star following her interview, writing, “Why are you lying @jordynwoods ?? If you’re going to try and save yourself by going public, INSTEAD OF CALLING ME PRIVATELY TO APOLOGIZE FIRST, at least be HONEST about your story. “BTW, You ARE the reason my family broke up!”

Kardashian later changed her tune, however, tweeting, “Jordyn is not to be blamed for the breakup of my family. This was Tristan’s fault.”